One of the responsibilities of the Ferguson Civilian Review Board, per ordinance, is to “…review crime data…to identify patterns and trends.”

To do this, Ferguson Police Department crime data is displayed on various graphs that make patterns and trends easy to see.

In addition, the Ferguson Police Department has recently implemented several interactive dashboards on the City of Ferguson website. One of those dashboards includes past crime data reported to the FBI and also current year crime data. The crime data dashboard can be found by clicking the tab for “Calls for Service and Crime”.

The following graphs show FPD data reported to the UCR program from the year 1985 through last year.

The number of crime incidents reported and the number of incidents cleared are both shown on the graphs. Incidents are cleared when at least one person is arrested, charged, and turned over to the court for prosecution; or when exceptional circumstances prevent the arrest and charging of the offender (i.e., victim’s refusal to cooperate with prosecution, the offender is in jail in another jurisdiction and can’t be extradited, etc.).

The data shown is for Part I crimes, broken into Property crimes and Violent crimes. Part I crimes are serious crimes that are likely to be reported. Part II crimes are less serious (drug abuse, vandalism, disorderly conduct, etc.) and are not included in this data. The FBI definitions and categorizations for all crimes can be found at FBI — Offense Definitions.

In order to smooth the data, three year rolling averages are plotted. Linear trends in the data are also plotted.

According to the UCR program, violent crime is composed of four offenses: homicide (murder and nonnegligent manslaughter), rape, robbery, and aggravated assault. Violent crimes involve force or threat of force. 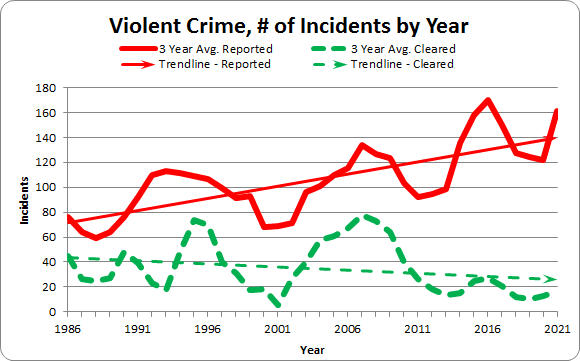 According to the UCR program, property crime is composed of four offenses: arson, burglary, larceny-theft, and motor vehicle theft. 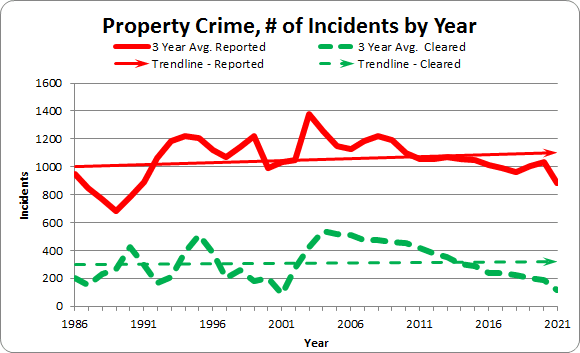 This chart shows a slightly upward trend in property crime reported in Ferguson. Property crime rose through the 1990s, peaked in the early 2000s, and has been slowly decreasing since then. 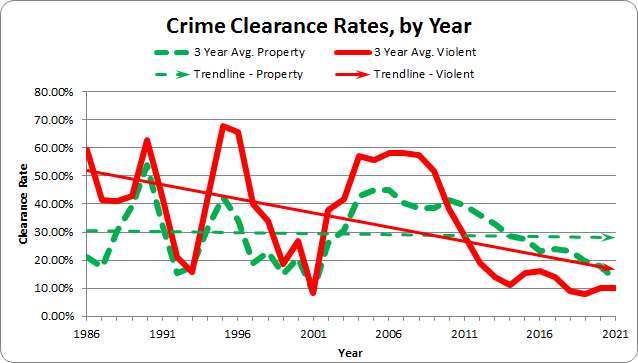 “A primary responsibility of the police is to solve crimes that have occurred in the past. Solving crimes requires a high degree of police-community collaboration—through reporting crimes and tips, witness participation in investigations, and the like. Law enforcement agencies across the country consider crimes solved when they are cleared by arrests. For this reason, clearance rates (for example, the ratio of crimes cleared to offenses known by the police) can serve as an indicator of not only police effectiveness, but also of police-community collaboration.”